Refreshed as I was, it did not take long for yesterdays aches and irritants to return. Foot sores and backaches reappeared within the hour. I tried to keep my pace but it was hard to do.

On the bright side, once out from under the canopy of forest the falling wetness was much reduced. A little bit of spray from the passing cars and trucks contrasted the blue sky above. But soon even that began to fade. As I walked, I kept tabs on how the streets began to dry up a little bit at a time. In the tire treads, then between the tires, then the dividers between the lanes, then finally the shoulders where my feet were falling...

That, THAT, my friends, is some exciting blogging. A description of watching the roads dry up. My dissertation on the vigor's of paint drying will be in stores in the next few months. Stay tuned!

This was my third day of walking and my feet were starting to feel it. Big time. Not only that but as I continued to move up and down these huge hills between Astoria and Westport (this was the closest town on the last green sign I had past the day before) and even though it was still cool I was starting to sweat it hot in the morning sun.

It gets kind of frustrating when you do not know how far it is to the nearest town or a gas station or any kind of rest stop. So when I crested a hill and found a country store and gas station I was pleased and disappointed at the same time. Pleased that I found a place to refill water and go to the bathroom. Disappointed that the gas station attendant who was nice enough to let me use the bathroom without paying for anything said that Westport was about 10 minutes away by car. Her rough estimation was ten miles on foot. I did not linger and got back out on the road.

A couple hours later I reached a town that was not on the map called Knappa. I would say something snarky about the size and insignificance of this town but I had a wonderful time in the Little Taste of Heaven Coffee Shop. The sweet lady who was running the joint all by herself let me stop and rest on the big comfy couch, gave me a cup of warm water to sip on, let me use the bathroom and most importantly, recharge my telephone for a couple of hours while I talked to Barbie. 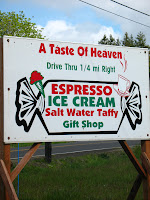 If anybody ever is passing through Knappa on the way to Astoria or to the coast, stop at this coffee shop and buy something. I bought a sandwich and it was good. They have coffee, tea, sandwiches, Ice cream, salt water taffy, gift cards, scented candles, hell, jump in the tanning booth for all I care. Bless them with a never ending stream of customers and a river of cash for their kindness. Resting there was so much more pleasant that walking; I did not want to leave.

Tired as I was I have to admit I had a moment of weakness. There was a bus station outside and I asked the nice lady whose name is Sarah if she knew how often the buses came through. She did not know. I asked her how far it was to Westport, and I shit you not, she said it was about ten minutes away by car, roughly ten miles...

I was so discouraged. I thought I had come a long ways from my camping spot. But in reality I had not travelled far enough for two different people in two different towns to differentiate between my locations.

Then I thought fortune was about to smile upon me. As I was leaving the coffee shop the bus was pulling in. I stopped to talk to the bus driver and he said that his route goes back to Astoria. Astoria to Knappa all day long. Crud.

Just outside of Knappa, as I resumed the trek, I saw a sign that I thought was going to be my salvation.
Posted by AaronAcrossAmericA at 1:40 PM 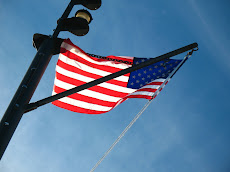 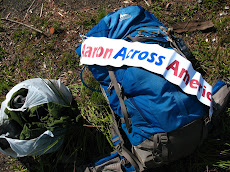